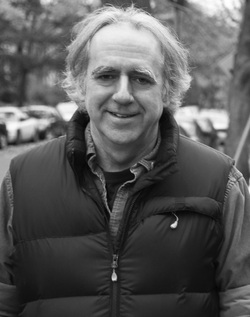 Bob Thompson dropped out of graduate school in American history after just three weeks and has been trying to make up for it ever since.  Turning to journalism after stints as a house painter and a librarian, he spent 24 years writing and editing in-depth feature stories at the Washington Post.  He edited the Post's Sunday magazine, wrote author profiles for the paper's Style section, and developed a particular interest in bringing complex historical narratives to life.  The father of two grown daughters, he lives in Washington, D.C. with his wife, Deborah Johnson, a journalist turned children's bookseller.  Born on a Mountaintop is his first book.


A CONVERSATION WITH BOB THOMPSON ABOUT BORN ON A MOUNTAINTOP:

Q. What drew you to Davy Crockett as a subject for your first book?

A. The whole thing is my elder daughter's fault.  One day when Lizzie was 4, she and her sister were in the back seat of the car listening to an old collection of Burl Ives songs.  It included “The Ballad of Davy Crockett,” the theme from Walt Disney's famous TV series – the one that begins “Born on a mountaintop in Tennessee / Greenest state in the land of the free.”  When it was over, Lizzie said: “Play that song again.”  A year or so later, after we'd read her everything about Davy we could lay our hands on, she outgrew her Crockett phase.  But I never did.  When my daughter first heard that song, I knew very little about Crockett; I had no idea, for example, how famous he was before his Alamo death made him immortal.  Yet I had long been fascinated by the ways history gets transformed into myth, and I found the relationship between the real man's story and his mythic afterlife irresistible.  When I left the Washington Post in 2009, I decided to take my Davy obsession on the road.

Q. To write Born on a Mountaintop, you traveled through the landscapes of Crockett's life and sought out people who still care deeply about him.  Why did you decide to tell the story this way?

A. One of the things journalism teaches you is that great stuff, much of it unexpected, tends to happen when you get up from your chair, go places, and talk to people.  I had a wonderful time following Davy around, and the decision to write the book as a road trip allowed me to introduce terrific modern characters and share the excitement of discoveries they helped me make.  It gave me another advantage over traditional biography, too.  Rather than simply pass biographical judgment on what's history and what's myth, I could show – by describing the mix of the two I kept encountering – how the real and mythic Crocketts came to be so closely intertwined.

Q. What did you learn about Davy – or David, as he preferred to be called – that you found particularly surprising or intriguing?

A. In general, I loved the fact that Crockett's story turned out to intersect with so much of America's – which, of course, is one reason we remember him.  He's in the middle of the bitter struggle between settlers and Indians, taking different sides at different times.  He personifies the radical expansion of democracy in the age of Andrew Jackson, as well as the unstoppable westward migration that drew risk-taking Americans to places like west Tennessee and Texas.  And he's the prototype of what we usually view as a modern phenomenon – the celebrity politician.  I was amazed to discover that Crockett pioneered the political book tour.  In 1834, he traveled to Baltimore, Philadelphia, New York, Boston, and the booming mill town of Lowell, Massachusetts, to flack his newly published autobiography and bash his political opponents.

More specifically, I was surprised and moved by Crockett sites too numerous to list here.  One was Lawrenceburg, Tennessee, where Crockett first ventured into politics and where a funky replica of his downtown office – wait, wait, the King of the Wild Frontier had an office? – made me feel as if I were walking around inside a Crockett time capsule.  Another was Clarksville, Texas, through which David passed on his way to the Alamo.  Hearing that he was heading into dangerous Comanche territory, a fabulous young woman named Isabella Clark jumped on her horse and tracked him down, risking her own life to possibly save his.

But my favorite site is the grave of Crockett's first wife, Polly, which I love both for its isolated, haunted beauty and for what happened there at the height of the 1950s Crockett craze.  Fess Parker's wildly popular portrayal of Davy made almost everyone want a piece of the action, including – as I learned one happy day in Winchester, Tennessee – the owner of a Nashville-based popcorn company who liked to call himself the Popcorn King.  In the spring of 1955, the Popcorn King arranged to buy three acres of land next to the Polly Crockett Cemetery.  He subdivided one into 6,272,640 inch-square tracts, printed up cute deeds for land on “Davy Crockett Mountain,” and gave those deeds away in movie theaters to anyone who shelled out for a large popcorn.

Q. After spending so much time researching Crockett, do you feel you have a sense of the real man behind the mythic Davy?

A. Yes, absolutely.  By the time I got to the Alamo, I sometimes felt as if I'd known David Crockett since childhood.  Yet even the David I thought I knew was full of contradictions.  He was a family man who never stayed home.  He had a wonderful, self-deprecating sense of humor, but got insecure and humorless when criticized.  He liked nothing better than being out in the woods with his dogs, but his ambition took him to Washington, where bear-hunting opportunities were scarce.  And he was a brave, patriotic man who had absolutely no desire -- when he rode west from Tennessee in 1835 -- to die a hero's death defending a battered old mission in San Antonio.

That's what I think, anyway.  But on my own road to the Alamo, I learned to be extremely cautious about certainties, mine or anyone else's.  We don't know how Crockett actually died (though everyone, including me, has opinions).  We don't know where his remains are today (I checked out four different possibilities).  Heck, we don't even know if the real man wore a coonskin cap (it's a long story).  Much of what we think we know about David Crockett comes from the deep well of storytelling that was created after his death, and even contemporary sources are muddied by the living-legend status he attained in the 1830s.  Over and over, I ran across dubiously-sourced anecdotes that had been incorporated in rich portraits of David -- often accompanied by the argument that they were “characteristic” of him, whether or not they could be proved.

Q. Just to clear up one thing, then: Was Davy Crockett really born on a mountaintop in Tennessee?

A. Nope.  He was born on the bank of the Nolichucky River, a beautiful spot with no mountaintop in sight.  Most Crockett fans know this, though a few are still surprised when they show up at the Davy Crockett Birthplace State Park and find it flat.  Disney's screenwriter wrote the lyrics to “The Ballad of Davy Crockett” in a huge hurry after the TV crew realized that they hadn't shot quite enough footage for three full shows -- Walt himself suggested using a song as filler – and absolutely nobody involved was checking facts.  They certainly didn't imagine that, more than fifty years later, baby boomers all over America would still burst into song at the mention of Davy's name.